Audit and Trace Services in Firebird 2.5

The new way to monitor database activity in Firebird 2.5

One disadvantage, which made it hard using Firebird in some circumstances, was a missing way to keep track of database operations continuously. A first step has been undertaken into this direction with Firebird 2.1 by adding the so-called monitoring tables. Firebird 2.5 goes much further now: The new Audit and Trace Services API allows tracing of server and database activity continuously. This article gives an introduction into the use of this new feature.

With the monitoring tables (MON$), introduced in Firebird 2.1, a user is able to query a point-in-time snapshot of the current database activities. For example:

• Overview on all transactions

• Overview on all SQL statements

• I/O- and record statistics at database-, connection-, transaction- and statement-level

Statements can be cancelled via the monitoring tables easily. It’s simply executing a DELETE FROM MON$STATEMENTS statement. This is especially useful when you have to abort a long-running query. In Firebird 2.5, two new monitoring tables MON$MEMORY_USAGE and MON$CONTEXT_VARIABLES have been added. Additionally, in 2.5 there is also a way to cancel an entire database connection/session and their transactions and statements. This is simply done by running a DELETE FROM MON$ATTACHMENTS statement.

Prior 2.5, to continuously monitor a database, the user had to use third-party tools, which basically can be categorized as followed:

• Proxy application, which intercepts the TCP/IP network traffic between the client application and the Firebird server and decodes the Firebird remote protocol properly

• API-Call-Interceptor application, which intercepts the API calls of the client application to the Firebird client library

Some of the supported statements are:

• Start/Finish of stored procedures and triggers

• Number of executed statements in a particular time period

• Is COMMIT RETAINING (soft commit) or COMMIT (hard commit) used by your application? With that information, possible performance problems can be examined

Both, monitoring tables and the audit/trace approach in Firebird 2.5 also don’t replace a trigger-based DML audit mechanism, because in that case, changed data can be stored in a structured (old/new value) and queryable way, as with IB LogManager [2]. With Firebird 2.5, there are now at least three monitoring approaches available. They are compared in table 1.

Driven by your monitoring requirements, you can choose one or a mixture of these approaches. In practice, the latter is used.

The remainder of the article will discuss the new Audit and Trace Services in more detail. Keep on reading!

An example says more than 1000 words

With the new command-line tool fbtracemgr, which can be found in the bin folder of your Firebird 2.5 installation, basic operations can be issued against the new Audit and Trace Services. This utility offers the following functionality:

• Suspend and resume a trace session

The following simple example shows the usage of fbtracemgr and how the trace output looks like. The trace configuration file includes the following lines:

log_connections is one possible parameter (beside others, more on that later), which in particular logs connect/disconnect operations to/from a database called employee.fdb. Another parameter log_transactions activates logging of transaction-based operations like starting, committing and rolling back transactions. Important to notice, that the structure of the trace configuration file is the same for a system audit and a user trace. fbtracemgr can now be used, based on the given trace configuration, to start a user trace (my Firebird 2.5 server runs on port 3051).

The following all in a single command line:

After a few client requests, the trace output looks like that:

As you can see, the trace output is simply text. In bold font you can see event types, e.g. ATTACH_DATABASE for a database connect/attach event. Each event type entry consists of a timestamp when the event happened, the process ID of the Firebird server process (in the example above: 2816), an internal trace number (0148D81C) to identify the trace session and the textual representation of the event. After that, event type specific data, e.g. the database name (employee.fdb), the attachment ID (ATT_<number>) and more is printed. Different event types can have different detailed data. For example, the START_TRANSACTION event type also includes information about the used isolation level (READ_COMMITTED) and more transaction-specific data.

Although this is easy readable for humans, it’s more complicated to parse the trace output, because we don’t have well-formed structured data like XML here. The structure of the data is implicitly defined by the included Firebird Trace-Plugin. To reverse engineer the structure of the trace output, it is necessary to study the source code of the trace-plugin and to make tests on what gets generated by the trace-plugin for certain event types. The trace engine in Firebird 2.5 is plugin-capable, so one could write a trace-plugin on its own, which generates easily-parsable trace data. Not an easy task though, because there is no documentation on how to write a customized trace-plugins available.

Firebird 2.5 comes with one trace-plugin as DLL or shared object file fbtrace(.dll|.so), which is located in the plugins sub-folder of a Firebird 2.5 installation. It implements the structure of the trace output as shown in the previous example above.

The Trace and Audit Services API also allows listing, stopping, suspending and resuming trace/audit sessions. Again, fbtracemgr can be used for these tasks. For example, the call for displaying all available trace sessions for a particular Firebird server instance looks like that:

With an example output:

Here you can see what data is part of a trace session:

• Session ID: Is generated by the Firebird engine and starts with 1 once the Firebird server has been restarted

• name: Optional, not unique name of a session, which can be provided when starting a user trace session

• user: Name of the user, who has started the trace session

• date: Timestamp, when the trace session has been started

More on the available command-line switches of fbtracemgr can be found in the Firebird 2.5 Release Notes.

Basically, a trace configuration can consist of a default section

with global settings valid for each forthcoming database-specific section, which can be expressed by a regular expression (conform to the new Firebird 2.5 predicate SIMILAR TO) identifying the destination database(s), for example as used in the simple example in the previous section

The various <database …> sections consist of the configuration parameters used to log actions at statement-level (e.g. prepare statement, execute statement, …), whereas the <services> section can occur only once, which allows to generate a trace of server-wide Services API calls like backup, restore, fetch header page, etc.

The trace configuration (file) gets read by the Firebird engine at start-up of an audit/trace, from top to bottom. Therefore, global parameters can be “overridden” by each database-specific section. An example:

In this example, an audit/trace at database-level is activated globally, but will be deactivted for the particular employee.fdb entry. For the tourism.fdb entry, it isn’t necessary to set enabled to true again, as long as the global parameter doesn’t change and a trace should happen.

Up to now, I’m only aware of two Delphi-based products, which have these calls implemented: IBObjects [3] with the freely available IBOAdmin package [4] and IBDAC [5]. Although, in case of the IBOAdmin package not in the publicly accessible SVN repository, but in my local development sandbox. If you are interested, just send me an email. The required extensions in the JDBC type 4 driver “Jaybird” are available in the HEAD branch. They might officially appear in one of the forthcoming Jaybird releases. Other products like FIBPlus[6] possibly already support the new Services API calls as well or might add them in later versions. 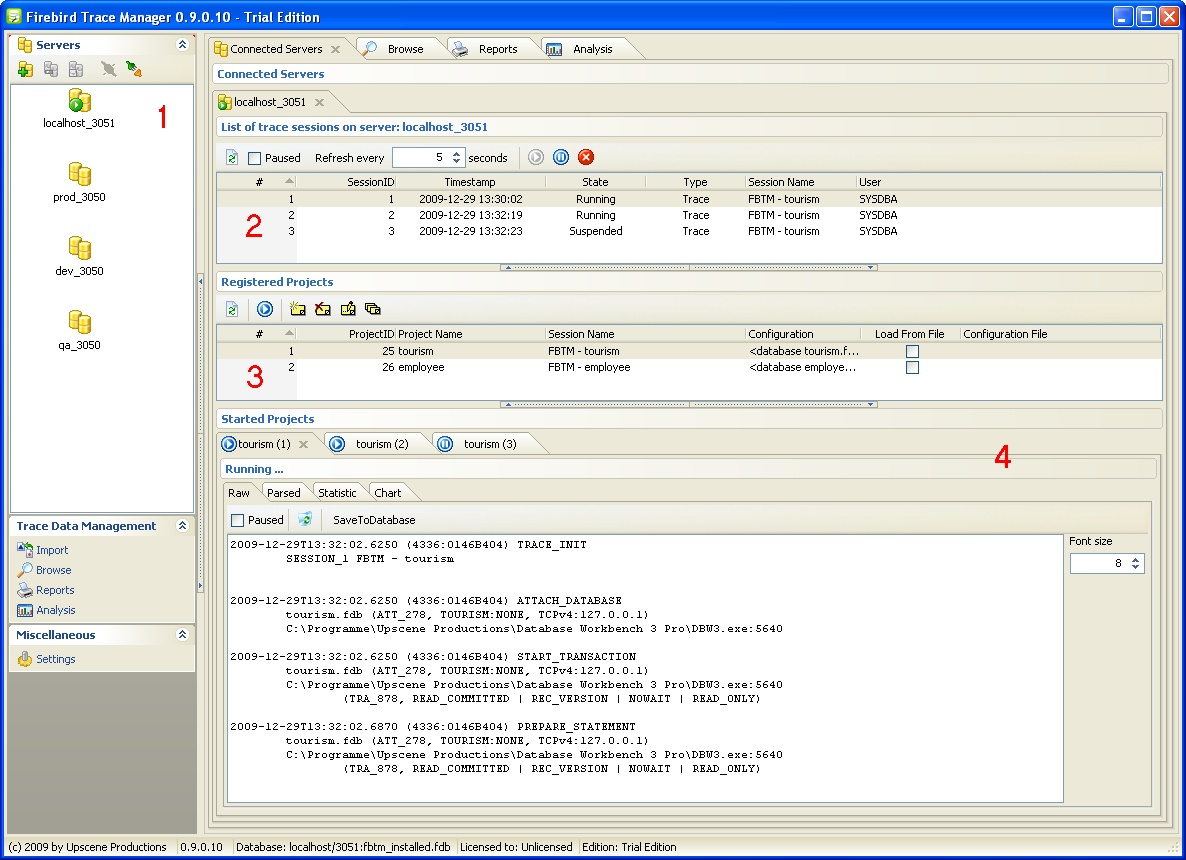 1 shows the main screen of the product. In the left area 1 there is a list of registered Firebird servers. A server entry allows the user to connect to the server via the Firebird services manager. In the right area, in the Connected Servers tab, you can see the current server attachments established by Firebird Trace Manager. Within a server attachment, in area 2, a list of trace sessions, including their states, is displayed. In this area, it’s very simple to suspend, resume and stop selected trace sessions. Per registered server, an unlimited number of projects can be created (area 3). A project basically defines the trace configuration as well as an optional trace session name. Based on a project entry, the user is able to start a new user trace session. Trace sessions started by Firebird Trace Manager are shown in area 4. Due to its multi-threading capabilities, Firebird Trace Manager can serve several trace sessions simultaneously, which includes receiving of “live” trace data and processing received data further. As with fbtracemgr, raw trace output will be received from the server (2).

In a first step, raw data will be processed by a context-based parser to transform trace data into a structured form (3). 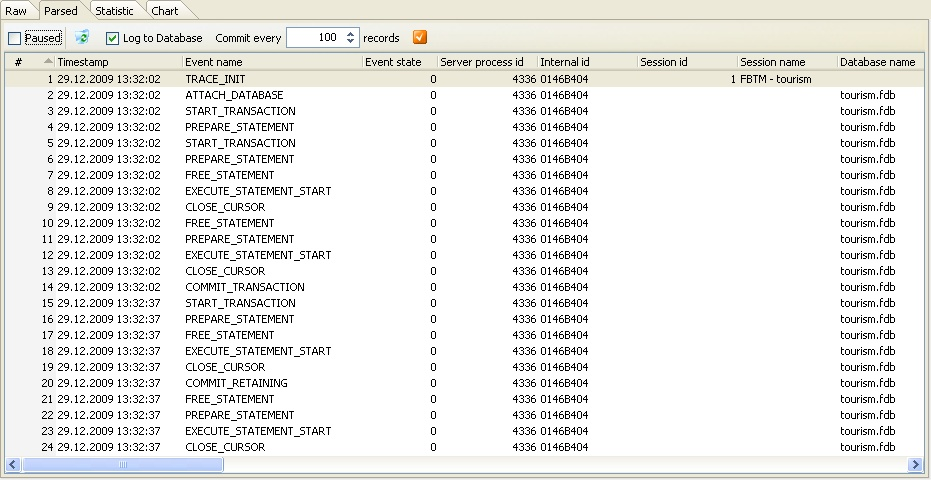 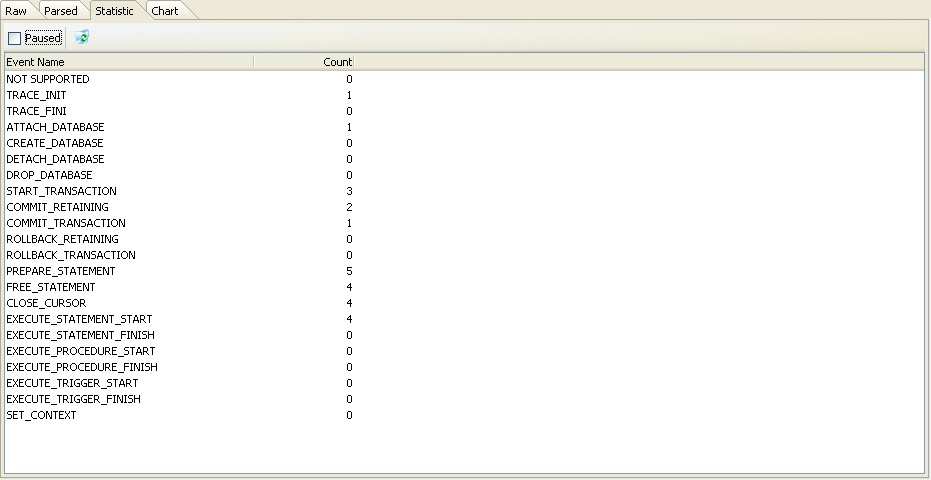 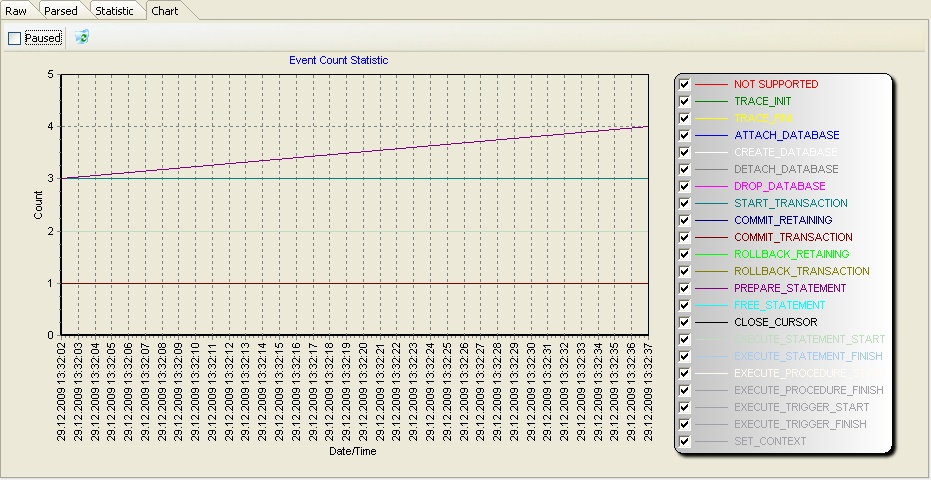 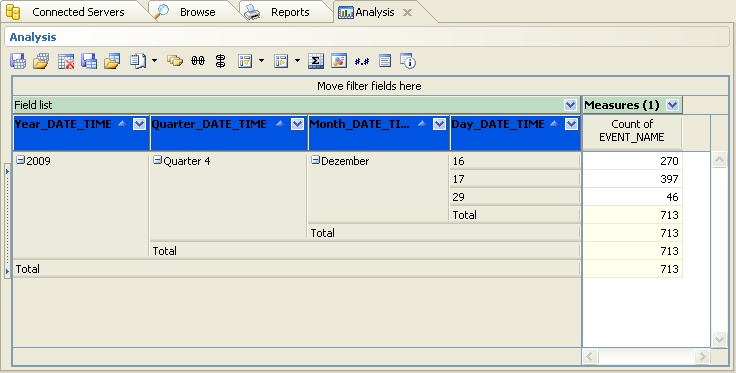 Due to the way the user can formulate ad-hoc queries in a visual way, the analysis capabilities are very powerful. The user can choose from a various number of attributes and aggregate functions, store queries and load/execute them at a later point, possibly on a different set of trace data.

Firebird Trace Manager is available in three different editions: Lite, Standard and Enterprise. The Lite Edition is freely available and basically is capable of receiving, storing and accessing raw trace data. Additionally, the Standard Edition includes the context-based parser, storage and access of structured/parsed trace data, as well as the Reporting module. The Enterprise Edition is the full-featured flavour of Firebird Trace Manager. Compared to Standard, it additionally includes the Analysis module and a planned – not in V1.0 available – facility to get automatically notified upon certain user-defined events.

Beside better SMP-capabilities in Firebird 2.5, the Audit and Trace Services API is possibly the second most important improvement. A continuous server-side trace has been long-awaited and now it’s available. Finally! In combination with the monitoring tables and a trigger-based DML-oriented mechanism, the Firebird project now has reached a good coverage in respect of monitoring Firebird databases.

Thomas Steinmaurer is an Industrial Researcher at the Software Competence Center Hagenberg [8] (Austria) in the area of data management and data warehousing specialized for the industrial manufacturing domain. Furthermore, he is responsible for the LogManager series (an auditing solution for various DBMS backends) and Firebird Trace Manager at Upscene Productions [7] and was a co-founder of the Firebird Foundation [9]. The author can be reached at thomas.steinmaurer@scch.at or t.steinmaurer@upscene.com.

This site and the pages contained within are Copyright © 2000-2022, IBPhoenix.