Tracking Down Crashes on Windows Systems

On Systems without Dr. Watson

In the firebird.conf file, there is a new parameter - BugcheckAbort, which by default is set to 0, if set to 1 and uncommented, this parameter determines whether to call abort()or BUGCHECK when an internal Firebird error occurs. If set to 1 and a bugcheck occurs the server will invoke a post-mortem debugger which will cause a traceable core dump to be produced that can be used for further analyis.

You need to set up Dr.Watson as your default windows crash handler. It is installed normally as default, but various development tools e.g Delphi, etc., may have replaced it. To do this, you need to run run "drwtsn32 -i" from the command prompt (drwtsn32 is an utility that is shipped with Windows).

Set up Dr.Watson as follows:

You should have something that looks like this picture: 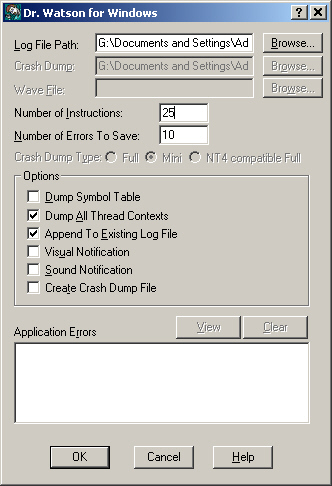 If you need to get information from a Firebird process that has hung, then you need to do the following

PDB is the program database that is generated along with binaries during the compilation process on Win32. It maps binary instructions to lines and variables in the source code. By reproducing the crash conditions while running under a binary built with the appropriate PDB, it is possible to dump useful information to track down the causes of the crash.

Set Up For Debugging

You can install the Firebird PDB on your machine and see source code information in Dr.Watson itself whilst the crash is actually happening.

This site and the pages contained within are Copyright © 2000-2023, IBPhoenix.